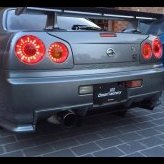 So as usual the Down Shift meet was marred with drama with an S15 crashing and a whole bunch of other morons chucking skids everywhere in their Hondas. Just remember this is exact thing that sets us

Thanks Raj and the Executive Team for putting together another great cruise! Despite the rain I think we were really lucky to have the road and meeting points mostly to ourselves. And a special thank

The man of the hour... Bald Hill Lookout Heading south via the Sea Cliff Bridge Arriving at Austi. More 22B Love... At the Austi Beach Cafe! Refuelling