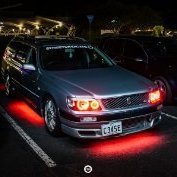 By mosquitocoils,
September 29, 2019 in Projects, Overhauls and Build-ups

Hi everyone, I used to be on these forums quite a bit going back 6-10ish years ago when I had my R33 GTST (avatar) and this was a great place where I found guides on how to do everything imaginable, a

Got the exhaust welded up... when someone does it for a living, they make it look too easy. My mate came over and did it suuuper cheap for me which is awesome! Started by cutting some bends and s

The last thing I needed to get done in a hurry was wheels. The car had 17 inch rota grid lookalikes when I bought it, they did the job but weren't exactly inspiring. A mate had these 18 inch RJR (Bob